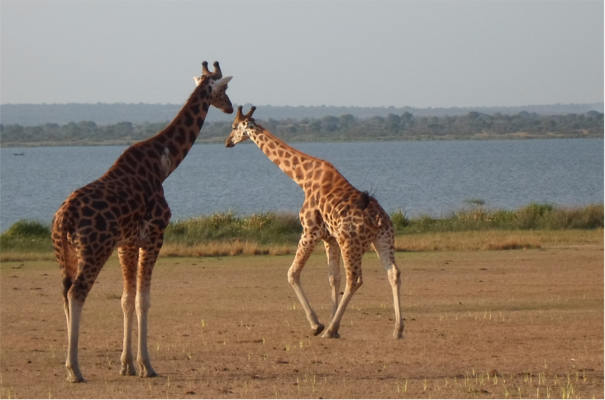 The Murchison Falls lie in the largest protected area of Uganda being part of the greater Murchison Falls conservation area. This includes the Budongo Forest which spreads for miles and miles and is yet to be fully explored.

The broad stretches of the Nile River are squeezed into a narrow gap of the Rift Valley gorge and the water roars through the narrowed gap creating the most spectacular falls in East Africa. Daily boat launches from Paraa take visitors along the river shore and sightings of hippos, crocs and all types of waterbirds including the shy shoebill, are generally plentiful.
The entire park lies lower than most of the other tourist areas in Uganda and is accordingly much hotter at certain times of the year.

North of the river, elephant are seen frequently but not in the numbers of the 1960s when herd of up to 500 were reported and the area was considered to have the highest density of elephant in Africa. All the wildlife has increased significantly in numbers since the 1990s and the park has a good, recovering population of Rothschild’s giraffe (scarce anywhere else in Uganda). There are good numbers of Uganda Kob, buffalo, Jackson’s hartebeest and warthog.
The vegetation in this area consists mainly of long grass interspersed with borassus palms, riverine woodlands and acacia trees (hence the giraffe). South of the river the vegetation is mainly denser woodlands.

The Budongo Forest includes the forest reserves of Budongo and Kaniyo Pabidi. This is a premier area for bird watchers and has the most varied forest fauna in East Africa. Of particular note is what is known as the “Royal Mile”, the stretch of road connecting Nyabyeya Forestry College to the main research station and thought to be the best single bird watching site in Uganda.
Some of the more unusual bird species include the yellow footed fly catcher, Ituri batis, lemon bellied crombec, white thighed hornbill, black eared ground thrush and chestnut capped flycatcher.

There are around 800 chimpanzees reported in the area and one of the best chimpanzee tracking sites in Uganda is found at Busingiro. Other primates found in the forest include red-tailed monkey, blue monkey, black and white colobus, potto and various forest galago species.
The forests are also a first class area for tracking down the 250 butterfly species for which Uganda is famous. Specialist guides are available for trips to see the butterflies as well as the 465 plant species found in the forest.