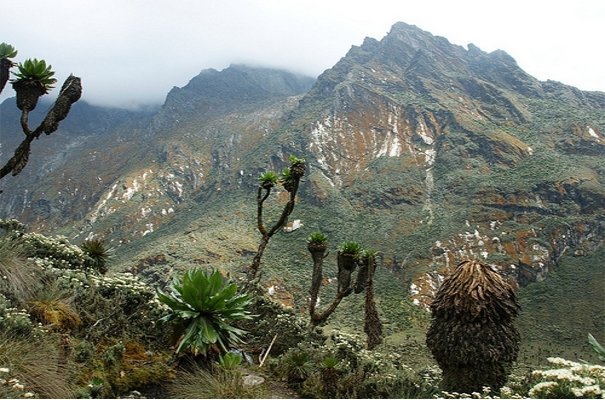 Rwenzori Mountains - "Mountains of the moon"

The Rwenzoris  area of 996 sq km– also known as the fabled "Mountains of the Moon" - lie in Western Uganda along the Congo border. Their snow-capped equatorial peaks rise to a height of 5,109m, while lower slopes are blanketed in moorland and rich montane forest. Most of the Park is accessible only to hikers although the magnificent scenery and 19 Albertine Rift endemics would be ample reward for birders. Rwenzori Mountains National Park protects the eastern slopes and glacial peaks of the 120km-long range, and is a world-class hiking and mountaineering destination. A nine-day trek will get skilled climbers to the summit of Margherita – the highest peak – though shorter, non-technical treks are possible to scale the surrounding peaks. For those who prefer something a little less strenuous, neighboring Bakonzo villages offer home cooked local cuisine, homestead visits and cultural performances.

Activities in Rwenzori Park
Mountaineering: Multi-day technical and non-technical climbs are available, to various peaks. Those who make it to the top will enjoy views of glaciers, the surrounding landscapes and the Congo.

Hiking: Single day hikes in the foothills provide bird watching opportunities in the varied ecosystems of the Park, as well as a waterfall visit

Bird watching: The Park contains over 195 recorded bird species including, Bee-eaters, robins, sunbirds and barbets are some of the 177 bird species that inhabit Rwenzori Mountains National Park. Other species to watch out for include the Rwenzori Turaco and long-eared owl, while higher up on the slopes, bearded vultures; swifts and black eagles may be seen circling for prey

Cultural experiences: Learn about life in the shadow of the “Mountains of the Moon.”

Wildlife: Most of the wildlife in the Rwenzoris is to be found in the forest zone above 1,800m. Black-and-white colobus monkeys are common, though other mammals include elephants, chimps, giant forest hogs, small antelopes and golden cats. You probably won't spot a tree hyrax, but you will hear their shrill screams if you spend the night here!

Getting there
The Nyakalengija trailhead is 22km from Kasese off Fort Portal road.

Climate: Rwenzori Mountains National Park is chilly and wet – expect daytime temperatures of 10-15°C, with much colder nights. January-February and July-August are the driest months, but heavy rain is possible at any time – come prepared!