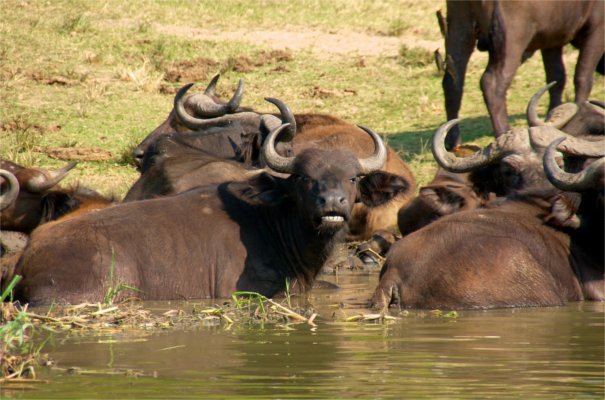 The Park itself is part of a much larger conservation area including the Ruwenzoris, Kibale, Virunga National Park and Kigezi/Kyambura.

The entire park is divided north from south by the Kazinga Channel.  A 40km long channel of water flowing gently from Lake George in the east to Lake Edward in the west.

The northern area features the Kasenyi plains (with a good game viewing network) in the east towards Lake George; the Explosion Craters in the west towards Mweya and Lake Edward.

The Mweya Peninsula on the northern bank of the Kazinga Channel at the confluence with Lake Edward is the main safari attraction in the north.  To the south, Kyambura Wildlife Reserve is in the east on the edge of Lake George, the main attraction is Kyambura Gorge

Maramagambo Forest and Kigezi Wildlife Reserve are in the east of the southern sector.
The Ishasha plains are in the south bounded by Lake Edward and the Ishasha River on the DRC border. The area boasts a tropical climate with temperatures never rising above 30 or dropping below 16 degrees.

The Mweya Peninsula is the focal point of the northern sector and has a great location with excellent views across the Kazinga Channel towards the Ruwenzoris.  The Mweya Information Centre has guides with whom “nature walks” are possible.

The Kazinga Channel launch cruises along the shoreline at 0900, 1100, 1500, and 1700 to get a close up view of good resident game (particularly hippo, buffalo, elephant) and fairly prolific birdlife including lots of waterfowl.  The launch runs clockwise down the southern bank towards Lake Edward and returns back on the northern bank – get a seat on the left side or find a spot on the top deck.  Cost is $30 pretty good for a 2 hour leisurely cruise.

Wildlife Safaris in the northern circuit

A fairly good road network runs parallel with the Kazinga Channel – a fair area for game viewing, apparently one of the few places where giant forest hog are regularly seen during the day.

The west of the main road includes the “Explosion Craters” with a large cluster of 7 crater lakes and dry calderas.  Lake Nyamunuka is clearly visible from the main road into the park – usually good for buffalo.  The area is generally good for elephant herds in the dry season.

To the east of the main road includes the Kasenyi Plain which has the largest concentration of game in QENP.  The area includes a large breeding ground for Uganda kob and is also good for buffalo, lion and grassland birds.  There’s a substantial breeding population of shoebill in the Kikorongo swamp.

The Kyambura River cuts a 100m chasm for about 16km through the surrounding savannah as it runs towards Kazinga Channel and forms the eastern boundary of QENP.  The gorge protects an isolated patch of riparian forest including a habituated population of chimps.
Success rates for viewing are quite high at around 80% and the forest is good for birds and the guiding is of a high standard.  Only 8 permits are available for the 08:00am or 13:00 hrs treks which last around 2-3 hours.  Permits should be booked in advance and cost $50.  The gorge includes red tailed, vervet, black and white colobus monkeys, olive baboons and giant forest hog.  The gorge rim itself and Fig Tree Camp is about 3 km from the main road, about an hour’s drive from either Jacana Lodge or Mweya Safari Lodge.

Maramagambo Forest
Maramagambo is one of Uganda’s largest tracts of tropical forest.  Noted for its rich diversity of forest birds and primates including a strong population of un-habituated chimps, Maramagambo Forest is relatively undeveloped yet readily accessible (about a kilometre away from Jacana Lodge).

Different guided walks are available from simple nature trails with the opportunity to visit the bat cave (home to several thousand Egyptian fruit bats) to the full day walking trail with a focus on the forest and its birds.

Ishasha Plains for tree climbing lions
The southern sector is bounded in the west by Lake Edward and the Ishasha River on the border with DRC.  Area has two main game driving circuits.  Southern circuit is where the main kob breeding grounds are found and is best known for the 40 odd tree climbing lions that frequent clusters of sycamore figs and albizias.  The northern circuit passes through the Lake Edward flats, a good area for general game viewing and a fair chance to see shoebill.  The road in the northern circuit can be very dodgy after rains.

The Ishasha River has a well established camp site set in good forest, particularly good for birdwatching.  Ishasha Wilderness Tented Camp on the Ntungwe River is the best base from which to explore the area.
Elephants are surprisingly good in Ishasha – there is a big herd of around 80 or so individuals on the southern circuit.